Orientational Effects on Soiling Measurements at the Sheldonian Theatre in Central Oxford, UK

A digital camera was used to photograph images around the Sheldonian Theatre, which is a semicircular building located in central Oxford, UK. Close-up images included a color chart for lightness and chromatic calibration across images taken between 10:00 and 13:00 in the spring in order to obtain comparative brightness levels for vertical limestone surfaces around this historical building. A digital light (Lux) meter was also employed in this study to capture variations in incoming sunlight onto building walls at ground-level. The outdoor integrated digital photography and image processing (O-IDIP) method was used, focusing on orientational effects on the lightness and coloration of surfaces. Images in Lab Color were calibrated based on a 3-point (black-white and green-red) procedure. The results convey the brightest surfaces on average to be west-facing. Conversely, the most variation in the means was evident on the east-facing side of the building and lowest on the west wall. These variances convey the effects of piecemeal maintenance of the building, so that on the same wall the lowest and greatest values of calibrated % Mean L appear. Soiling patterns are affected by microclimatic effects, with wind-driven rain in Oxford coming predominantly from the southwest, affecting buildings differently at the regional to local scale. This means that south- and west-facing walls may be relatively more rainwashed than north- and east-facing walls, which could complicate the results as a confounding variable acting on the degree of soiling and surface brightness. However, Lux meter readings helped to clarify this complication, showing the least illumination on west- and south-facing building walls. The study, hence, contributes to disentangling between and elucidating outdoor lighting conditions and soiling patterns imposed by microclimatic effects on vertical (limestone) surfaces, such as this historical building exterior, where the brightest illuminated surfaces are not west-and south-facing, but rather east- and north-facing. It thereby quantifies the extent of brightness ranges in soiling patterns created by rainwashing (exposure versus sheltering) effects. Finally, the 3-point calibration procedure now integrates chroma as well as brightness and contrast adjustments, allowing for the outdoor measurement of areal chromatic change on building exteriors. The building walls in this study are mainly Slightly Dark and only a minority are actually classifiable as Dark. 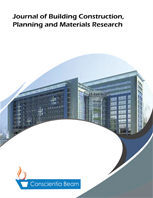